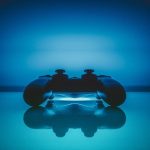 One Taiwanese man was lucky to get his hands on a brand new PlayStation 5. Just one problem, his wife wasn’t a fan of the amount of time he was already spent in front of the TV playing video games.

So he did what any man would do in this situation and tried to hide the PS5 from his wife by attempting to pass it off as an air purifier.

Although the Taiwanese man fooled his wife for a bit she quickly discovered that the new “air purifier” was in fact a PS5. Furious with her husbands purchase she sold the PlayStation 5 and according to the lucky buyer he purchased it at very discounted rate. Lucky guy!