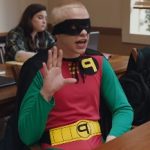 Move over Eminem and make way for Peat Davidson, who pulled off the best parody I’ve seen in a while on SNL over the weekend.

Davidson was joined by musical guest Jack Harlow and Chris Redd for this awesome rap parody of Eminem’s 2000 hit “Without Me” leaving nothing on the table as they helped explain cryptocurrency.