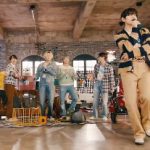 For the first time on Tuesday night BTS preformed “Telepathy” live along with their summer hit “Dynamite”, as well as, Coving Coldplays “Fix You.”

All good things must come to an end, and so does @BTS_twt's #MTVUnplugged performance… BUT not without a few parting words from our boys first! 💜 #BTSonMTV pic.twitter.com/6IePpkcS3q