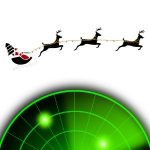 It’s Christmas Eve!  And one of my favorite things to do on Christmas Eve is to track Santa’s journey as he drops off presents around the world.

For 65 Years, NORAD has been tracking Santa. It all began one Christmas Eve in 1955, when a young child accidentally called a wrong number, thinking she was calling Santa. She actually reached an unlisted number for the Continental Air Defense Command (CONAD) Operations Center, who told her that Santa would have a safe flight that year. A few years later, when NORAD was created, they decided to continue reporting Santa’s location every December 24th – to millions of people across the globe.

The same assets we use in our aerospace warning and aerospace control missions 24/7/365 are used on Dec. 24 to Track and escort a certain VVIP @NoradSanta NORAD Santa Tracker https://t.co/LMCfnaoQdu @RCAF_ARC

You can watch the journey on social media, or at noradsanta.org