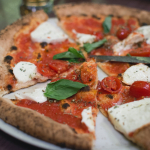 YouTuber Mr Beast and six of his friend challenged competitive eater Joey Chestnut to see who could eat a 6-foot, 18-pound pizza the fastest.

Let’s just say Mr Beast and his friends were no match for Joey Chestnut who finished his pizza in just over 30 minutes. Now that is impressive if you ask me but it came at a bit of a cost. Prior to eating the 18-pound pizza they weighed Joey who came in at 229 pound and following his accomplishment he gained 21 pounds yikes!

Check out what Joey had to say about eating the giant pizza here.