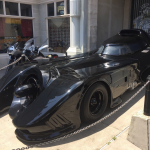 If you grew up wanting to own your vary own Back to the Future DeLorean or maybe you were like me and wanted to own your very own Batmobile. Well now you can thanks to the U.S. Marshals because they are auctioning off a replica of those two iconic cars along with a replica of the Ghostbusters Ecto-1!

Ryan Sheridan of Ohio the owner of these cars is now sitting in jail for over billing Medicaid through his phony rehabilitation center that he had been running for years. Since being busted by the U.S. Marshals he had to forfeit these awesome replicas along with several other vehicals and they are all set to be sold at action on August 1 on Skipco.com.