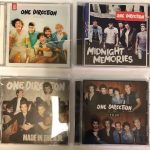 Today is the 10 year anniversary of One Direction’s formation on the X-Factor UK. Originally all five members of the band auditioned as solo artist with Liam Payne being a real front runner as a solo artist on the show. However, things doing go as planned for the five as individuals as they were eliminated from the competition shortly after the audition rounds but there was a saving grace because the judges decided to put Liam, Harry, Niall, Louis and Zayn together to form a boy band for the competition. Check their X-Factor journey out below.

In celebration of One Direction’s 10 year anniversary they released a 10 years of One Direction video and the guys have been tweeting all day about the occasion with the exception of Zayn who’s staying hush about the whole thing.

I’ve been struggling to put into words how grateful I am for everything that’s happened over the last ten years. I’ve seen things and places that I’d only ever dreamt of when I was growing up. pic.twitter.com/yfAv8aUpbe

when I met these four gents there was no way I thought we would go on to do what we did. So many unbelievable memories we shared together. We felt the adoration of millions from around the planet on a daily basis and it was mind blowing. pic.twitter.com/rHeGL8rY7z

What a journey… I had no idea what we were in for when I sent this text to my Dad ten years ago at this exact time the band was formed. Thanks to everyone that’s supported us over the years and thanks to the boys for sharing this with me #10YearsOfOneDirection pic.twitter.com/0d17ggB66x

Too many incredible memories to mention but not a day goes by that I don't think about how amazing it was. @NiallOfficial @Harry_Styles @LiamPayne @zaynmalik . So proud of you all individually.