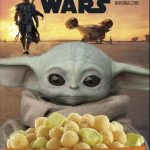 This past Star Wars Day, May 4th if you were wondering, General Mills announced that a new cereal would be hitting store shelves latter this summer.

That new cereal happens to be a ‘Baby Yoda’ cereal inspired from Disney+ “The Mandalorian”. The cereal from a galaxy far far away will include marshmallows shaped like The Child – who came to be known as Baby Yoda along with sweetened corn puffs.

The new cereal according to delish.com Will be available latter this month at Sam’s Club in a box with two bags in it for $5.98. they will also be available at Walmart but will come in a single pack.

May the 4th Be With You! Coming to a cereal aisle near you later this summer. #maythe4thbewithyou #starwarsday