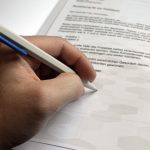 As stressful as it may be to be left handed just remember your are part of an elite group. Only 11% percent that’s right 11 percent of the world’s population is left-handed.

While being left-handed might still be looked upon with suspicion, many southpaws go on to lead successful lives. Lefties who have found success include former U.S. President’s Barack Obama, James Garfield, Harry Truman, Gerald Ford, Ronald Reagan, George H.W. Bush and Bill Clinton. Personalities such as Ophrah Winfrey and Bill Gates are left-handed and even guitarist Jimi Hendrix was left-handed. There have also been left-handed scientist that include Albert Einstein, Marie Curie, Sir Issac Newton and Alan Turing.

Now as a lefty going back to school was always stressful because I could never find left-handed school supplies. However, that all changed when I found Lefty’s the Left Handed Store in San Francisco. I got all of my school supplies from them and it made getting through collage a breeze and they offer an online store at https://www.leftyslefthanded.com.