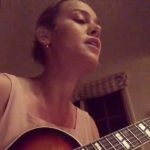 Captain Marvel star Brie Larson is a huge fan of Ariana Grande. The actress posted a short video of her doing an acoustic cover of “God is a Woman.”

In here caption, Larson wrote, “Verified
*~*ariana forever*~* (big big thank you to the legend @nancywilson for sending me her custom @gibsonguitar – I will never get over it 💖💖💖💖).”

This isn’t the first time Larson has covered one of Grande’s songs, she previously filmed herself performing “My Everything.”

Although Larson is known for her movie career, she does have a history in the music industry. She released an album in 2005 titled Finally OUt of P.E. and had some success with a bubblegum pop single called “She Said.”