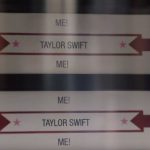 Coincidence? I think not especially when it comes to Taylor Swift. The ‘Me’ singer has a reputation for sending her fans on wild goose chases looking for easter eggs in everything she does. So it’s no surprise that her new commercial for Capital One was jam-packed with easter eggs.

The 30 second commercial feature Taylor Swift holding down two jobs, as a waitress and a bartender. Although she’s not succeeding at either one but let be honest she’s doing a better job then I could ever do in those roles. Fans quickly noticed sevral tiny details in the ad that are nods to Taylor’s personality and music. Check the commercial out below and let me know how many nods to Taylor Swift you caught on Twitter @RConAir_967 or on Facebook Robby Cruz.