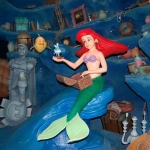 Lizzo is Campaigning to replace Melissa McCarthy in the live action adaptation of Disney’s “The Little Mermaid.” Other than Melissa McCarthy who according to Variety said that she’s in talks to play the villain, Ursula we have no idea on who the rest of the cast will be.

Once news broke out about the potential hire, Lizzo responded by painting herself purple and singing Ursula’s big song from the movie, “Poor Unfortunate Souls.” Check the video out below and let me know what you thing on twitter @RConAir_967 or on Facebook @RobbyCurz967