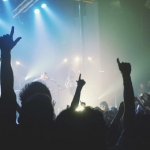 Gilligan Moss bring a rhythm-oriented new wave sound of Talking Heads and Roxy Music, as well as a dash of Daft Punk, to bring you some electric dance-pop music.

In 2015 Gilligan Moss released his debut EP “Ceremonial” and later that year toured with Glass Animals before teaming up with his childhood friend Ben Cronin to become a duo.

Take a listen to Gilligan Moss’ song “Want U So Bad” before heading out to Pfiffner Pioneer Park tomorrow night for Levitt Amp. The music starts at 6pm with Catalytic so come on out and enjoy a night of music.