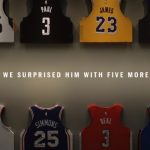 Ok! I may have teared up watching this, this morning! Budweiser you truly hit it out of the park (or basketball court) on this one!

Dwyane Wade is retiring for the NBA and Budweiser wanted to honor him… and boy did they do it right!

According to SB Nation, Wade has been collecting players’ jerseys all season long to put on his wall, but there were 5 more he needed to add to the collection’ he just had no idea who they were coming from; so they surprised him mid-court at American Airlines Arena and that’s where he came face-to-face with five people whose lives have forever been changed by his actions of the court.

Things to remember –  you never know who you are inspiring!

Dwyane Wade – thank you for inspiring to be a better person and changing a number of lives throughout your career! You sir are one in a million! Happy retirement!