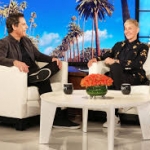 The 53 year old actor along with his daughter Ella took a break from touring Southern California colleges and stopped by The Ellen DeGeneres Show. He joked with Ellen, that his 16 year old’s collegiate future was already decided by saying, “She is going to Yale on a full football scholarship. And she’s going to major in Photoshop.”

The Zoolander star got serious with Ellen and reflected on the college admissions scandal involving Hollywood stars Felicity Huffman and Lori Loughlin who have both been charged with paying off University officials so that their children could be admitted into school. Stiller told Ellen, “No, it’s a crazy time…I mean, look, there’s crazy pressure that the kids go through and the parents go through, but obviously, you gotta draw the line.”

If you haven’t seen the hilarious clip check it out below.