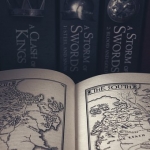 So HBO released the final poster for the upcoming final season of Game of Thrones and at first glance it appears to be a very empty iron throne. However, if you look closely and at the bottom of the poster you’ll find two red eyes staring right at you.

Now I hope this is HBO’s way of throwing us a curve ball rather than spoiling the outcome of this epic battle we’ve been hearing about for months now. The final season of Game of Thrones begins April 14th on HBO.